Math Skill: Creating and interpreting line graphs (Numbers up to 250)

Purpose: Understand trends in the amount of municipal waste since 1960 and develop awareness for waste reduction

Almost every activity we do in our lives leaves behind some type of waste.  From making crafts to cooking dinner, we constantly generate waste.   Human society is indeed closely linked to waste. There are tens of waste types, including municipal solid waste (MSW), hazardous waste, industrial waste, and electronic waste.

The United States generated an estimated 268 million tons of MSW. That means 4.51 pounds of waste were discarded every day from every single American. The amount of municipal solid waste (MSW) tripled over the last 50 years in this country.  It has increased by more than 170 million tons since 1960. One of the reasons for the increase is population growth. The population in the country has increased by 75% since 1960. Our social structure that seeks economic growth based on mass production and mass consumption is also responsible for the increase. Per capita waste generation in 2017 is 1.7 times larger than that in 1960. 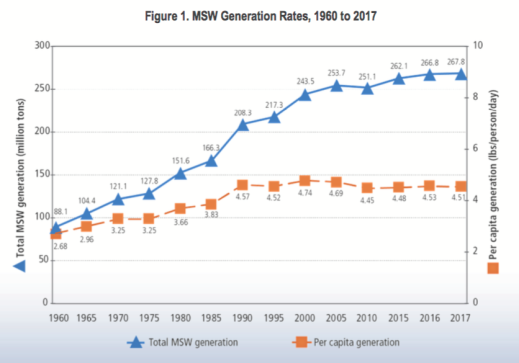 Environmental impacts from municipal solid waste (MSW) & What we candy

The purpose of this activity is to enhance students’ skills in data analysis. The worksheet was created based on the amount of trash discarded between 1960 and 2015. The data was obtained from “Advancing Sustainable Material Management: 2017Fact Sheet” prepared by the  U.S. EPA in November 2019.

Math Skill: Creating and interpreting line graphs (Numbers up to 250)

Using the table which shows the amount of the country’s MSW  between 1960 and 2017, students are asked to create a line graph (A1). They also complete questions using the line graph they created (A2). 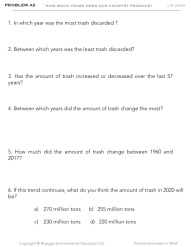