Purpose: Understand efforts in air quality improvement in the country and develop awareness of air quality

It is estimated that the average person breathes 3,000 gallons of air each day. That means if the air in your area is polluted by dangerous chemicals, you inhale those contaminants into your lungs which could cause health problems. Air pollution is the introduction into the atmosphere of chemicals, particulates, and biological matter that can have adverse effects on human health and/or other living organisms, or damage the natural environment.  In this country, more than 4 out of 10 people still live in regions where the concentration of certain air pollutants exceeds federal standards. In addition, increasing concentration of greenhouse gases in the atmosphere over the past century has led to climate change that may result in more severe weather events, including intense rains, floods, droughts, snow, and extreme heat and heat waves in many regions.

During the mid 1900s, many cities in the United States suffered from serious air pollution.  For example, in 1948, thick clouds of air pollution that lingered for five days killed 20 people and made roughly 6,000 people sick in Donora, Pennsylvania. To control air pollution on a national level, the Clean Air Act was designed in 1963 as the first federal environmental law.

In 1970, the Clean Air Act was dramatically revised to provide a more effective national program to address the nation’s air quality. The United States Environmental Protection Agency (U.S. EPA), which was established in the same year, has taken a leading role in enforcing the law since then.

Under the Clean Air Act, the EPA sets standards on certain air pollutants regarding how much can be in the air and requires major industrial sources to install pollution control equipment to meet emissions standards. Monitoring systems that track emissions of certain pollutants also began in 1970 to record air quality trends. The EPA has also provided funding to promote clean air efforts. 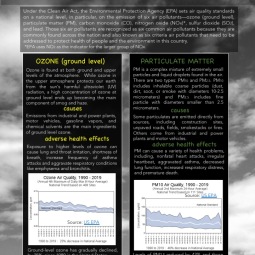 The timeline highlights some air quality-related events in the United States. Through computing the number of years between each event, students will strengthen skills on subtraction of large numbers, while enhancing understanding of our history of air quality improvement  since the mid 1990s.

Using the numbers given in the timeline, students are asked to compute the number of years between two events. 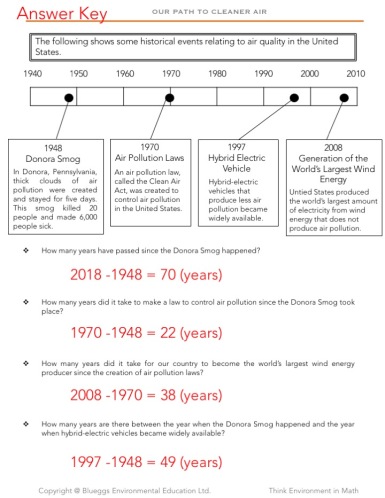