In the early 1900s, our air in Evansville has been heavily polluted mainly due to the combustion of coal for energy generation, industrial production, and manufacturing.

The regulation of air pollution started in 1931, when the concern with air quality was first documented by Evansville’s first smoke ordinance. Monitoring and controlling air pollutants in Evansville started in 1970 when the Air Pollution Control Department was created in the City of Evansville. In 1974, its role was taken over by the newly created Evansville Environmental Protection Agency (EEPA).

Specifically, the EEPA regulates emissions of air pollutants by requiring businesses and manufacturers to obtain operating permits when they install, modify, or operate any equipment that could potentially discharge air pollutants.

EEPA also regulates open burning* since air pollution from open burning can cause serious health problems and damage the environment. Most open fires require advanced approval from the EEPA.

People in the City of Evansville need to call 435-6145 to let the Evansville EPA know before they burn materials outside. It is against the rules to burn household trash, paper or plastics, leaves, grasses, wood that is painted, stained or glued, building materials, root balls or tree stumps.

In addition, the EEPA issues Air Quality Alerts including Ozone Alerts and Particulate Alerts when levels of some air pollutants are projected to exceed national air quality standards. Air Quality Forecasts are also provided on  the EEPA’s website. 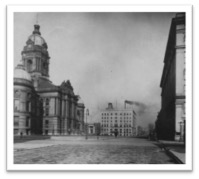